The German conservative party CSU recently held a closed meeting where the talk was of „our values“ and „integration“. But it centred ultimately on a ‚duty‘ – of „all (Muslim) children, women and men to attend language and integration courses“. A possible sanction was added: failure to meet this requirement could mean losing out on material provision (Süddeutsche Zeitung 27.12.15 / 07.01.16). British Prime Minister David Cameron, who was there too, when back in England also talked of the value of learning languages (in his case of course English) – and here it got blunt – in order to counter ‚radicalisation‘ (Guardian 18.01.16). 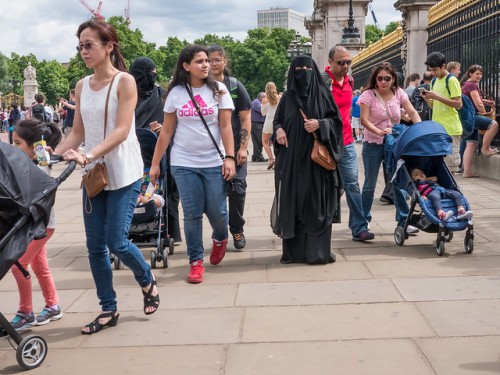 Again referring to Muslim women, he noted that some will be from ‚quite patriarchal societies‘, whose menfolk may not want women to speak English. Which may be so, except that he added: „If you are not able to speak English, not able to integrate [note the unashamed link!], you may find you … could be more susceptible to the extremist message coming from Daesh [=IS]“. True, the reference here was to folk coming from abroad to England. But if non-English speakers are defined as ‚more susceptible‘ to extremism, that almost hints that being ‚civilised‘ is somehow associated with being able to speak English. Some Anglos possibly do think this!

In any event, Cameron’s unwise directness was noted. The Liberal Democrat MP Tim Farron (same Guardian source) was explicit: „Linking women in the Muslim community who struggle with the English language to home-grown extremism only serves to isolate the very people Cameron says he is trying to help“. And Ed Kessler, director of the Woolf Institute, which looks into issues of religion and belief in public life, added: „It is extremely unfortunate that the Prime Minister has chosen to focus solely on Muslim women“ when discussing the issue of integrating immigrants. Others who commented on Cameron’s suggestion that 22% of Muslim women living in Britain had limited or no English pointed to recent cuts being made in funding the teaching of English to speakers of other languages (Esol). One added that „community facilities – especially those aimed at women – have faced significant cuts“.

Just how easily talk about Muslims can get heated up over language is shown by another recent story in the British press. A 10-year-old Muslim lad living in Britain mistakenly wrote of the ‚terraced‘ house his family live in as a ‚terrorist‘ house (Reuters 20.01.16, Guardian 21.01.16). Looked at closely, the real facts are clear enough. The words ‚terraced‘ and ‚terrorist‘, if spoken quickly, are almost identical in sound: terrest. So a spelling mix-up in writing can easily occur – and this boy was after all only 10 years old. Claims that the authorities reacted responsibly evade a basic fact: namely that his teacher, instead of sorting out a simple spelling mistake, went to see the police, who in turn took away the boy’s laptop. It is the case that, since July last year, the law requires teachers to report any suspected extremist behaviour to the police. Who, fortunately, realised here that it had been just an unintended error on the part of the youngster. But we must ask: why did his teacher not first discuss her worries with her colleagues? Or was it panic on her part at the thought of how ‚the law‘ might react? A sensible demand from the boy’s parents was for a school morning assembly to clear things up for everybody. Also to ensure that the boy, their youngest child – who was of course greatly disturbed by it all – would not be bullied by other pupils.

A silly incident, but perhaps a parallel to other unsure attitudes expressed by some in politics towards Muslim women. Without oversimplifying things: weaknesses that immigrants experience in using the language of the country where they are living obviously need to be overcome – as a positive effort. But this must not be misused for cheap political ends.